I can’t believe my last post was 6 months ago!  Time really does flies when you’re having fun!

Personally: I got engaged, and have been wedding planning. My best friend got married, and I was bridal shower planning.

Professionally: I’ve officially started my PhD, and field work in the coffee plantations of PR is continuing. I’m taking classes, so I’ve had to figure out how to balance work, a degree and classes. It’s been good so far 🙂

My PhD will be on the same coffee plantation research I started last year, but will be a lot more detailed than originally planned.

I went down to Puerto Rico in February, to try and find coffee farmers that fit the shade/sun criteria and the canephora/arabica  criteria, but it proved to be a lot more time consuming than I thought. Probably spent a minimum of 5 hours driving around the mountains near Utuado for the entire two weeks I was there. Once I found people willing to participate, I realized I timed my arrival wrong. Coffea canephora flowers bloom earlier than C. arabica flowers, in Puerto Rico. So, I arrived about 2 weeks to late too pollinate the canephora flowers, and 2 weeks too early to pollinate the arabica flowers.

A bit of background on coffee

Coffea canephora and C. arabica are the two main species of coffee that are commercially produced worldwide. Coffea canephora has a more robust flavor, and is hardier with regards to weather and pest tolerance. It’s also known as Robusta coffee. It’s usually not considered a high quality coffee, because of it’s strong, bitter flavor. Coffea arabica on the other hand, is the nicer smoother coffee, which you’ll see in stores sold as whole beans. Both species of coffee were originally grown as shrubs under forest canopies. But, because of agricultural intensification, growers have started clear-cutting land, and planting coffee in full sun (i.e. Sun coffee). This is a way that growers can achieve a high yield, but it requires a large amount of chemical inputs, such as fertilizers, herbicides and pesticides. Shade coffee is grown under a tree canopy, which can vary from fruit trees, to a few species of nitrogen fixing trees, to a full-blown native tree canopy (like a forest). All of the shade densities and compositions have different names (e.g. full-blown native tree canopy = rustic coffee plantation). The presence of a shade canopy can help production by slowing down the coffee bean’s maturation rate, allowing it to grow bigger. Bigger beans are considered of higher quality than small beans. 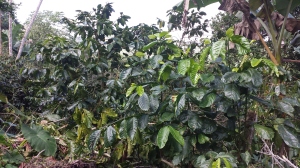 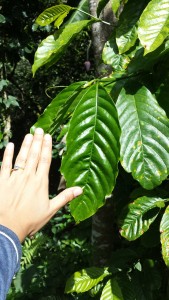 Where do bees come in?

Bees play an important role in coffee pollination. Although C. arabica can self-pollinate (i.e. no need for cross-pollination by animals), the quality (size, shape, etc) benefits from pollination. Coffea canephora, on the other hand needs to be pollinated. Bees are the main pollinators. We are trying to figure out how the agricultural practices (sun/shade) can influence the bee population on the farm, and ultimately how crop pollination is affected by the bee population presence/absence on the farm.

Stay tuned for more details. I promise, I won’t let another 6 months go before posting again!