On top of the world!

Posted on January 23, 2016 by saraguitiprado

This week was action-packed! On Monday we went to Maricao and found a few of the Arabica coffee plants which were flowering, and hand-pollinated those. It was really interesting to pollinate the Arabica flowers after having pollinated Canephora ones, last week, because their size and shape are completely different! 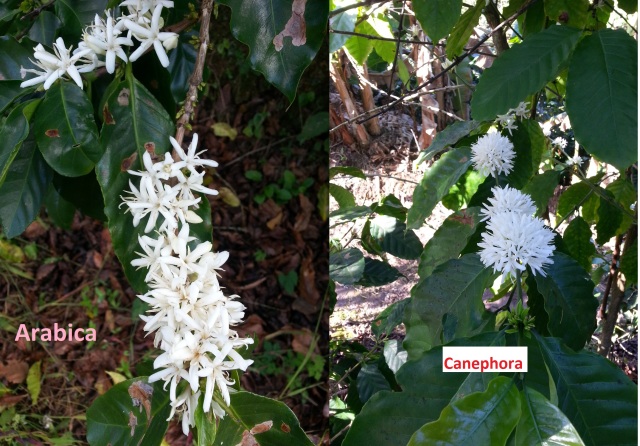 Comparing the floral display of Arabica (left) to Canephora (Right)

Me on a trail in one of my favorite farms! I’m smiling but I’m actually really sad…

Location of my field sites on the island. Four main regions (Left to right): Las Marias, Maricao/Yauco, Adjuntas and Utuado. In case you’re curious, our field house is at the south west of the island…far from all sites!

On Tuesday, we made our way to Utuado (far right on map), because that’s where the majority of our shade coffee plantations are located. **Just for some background…the shade coffee plantations are part of a shade initiative promoted by the Natural Resource Conservation Service (NRCS), and this initiative has been in place since the early 2000s. Utuado was one of the first regions to participate in this initiative, so the shade trees at the farms in Utuado are about 15 years old, meaning they’re providing a good shade canopy, now.** Utuado is about a 2.5 hour drive from our field house, so we ended up staying there for the week (at the aviary where they breed some of the endangered Puerto Rican parrots). The coffee there was nowhere near ready to flower (recall different temperature and humidity), so instead of hand-pollinating, we set traps, netted bees and set-out HOBOs out at our farms.

The traps we set out are for the first objective (see my previous post for a reminder). I had originally planned on setting traps inside the forest, but when we got to the edge of the forest and the farm, we realized that the forested patch was inaccessible. So, we modified our protocol to set traps from the forest edge to about 100m into the farm. Why was the forest inaccessible? Well, think about what growing along a mountain top entails. It’s steep, and difficult to work on, so most of the growers have created flat paths inside their farms so that they can access all of their land and crops. Well, if they aren’t planning on cultivating anything in the forest, they don’t create a path to it! And, often the path ends sharply at the edge of a cliff. The reason the farmers don’t grow in the forest is either because 1- they don’t have time to tend to all that land, 2- the terrain is inhospitable (too steep or rocky) or 3- it’s by stream (too wet).

My awesome technician, Rafael, setting out a trap along the forest edge (note the forest right behind him!)

It was tough work walking up and down the mountain-side. Growers have really strong legs! They do it in simple sneakers, and I’ve got hiking shoes on, and still find it tricky! Anyways, we got everything we wanted to get done, and had enough time to go scout out one more farm on Friday, before heading back to the south-west of the island, where our field house is. It’s nice to be back here, and nice to relax for the weekend…need to re-energize for next week!

I'm a Tropical Ecologist, Researcher, and Mother
View all posts by saraguitiprado →
This entry was posted in Agroecology, Exploring new places. Bookmark the permalink.
%d bloggers like this: