Wowza! What a day! Everything bad that could happen, happened.

My friend and colleague, Loreli and I were out surveying one farm with one crop (pumpkin) and two river sites today and I now have a story to tell!

All started out well this morning – we stopped at a river site, surveyed, caught a bunch a big and beautiful bees. Great! Then we went to the second river site, put down our bee bowls. All still good. Made it to the farm site, put the bowls and started sweep netting, and then the fun began. We usually sweep for 30 minutes, but, about 25 minutes into the sweep survey, I got a call from Loreli. I was kind of confused since I had just seen her walking down, and usually we focus on bees, and not phone calls while surveying. Nonetheless, I answered and she told me she had just gotten stung by a bee (now think it was a wasp) and was on her way to the office. This was her first time getting stung by a bee, wasp or anything, so we both had no idea how she’d react. So I quickly made my way to the office. When I got there, she was OK, but her hand was quite swollen where she was stung. 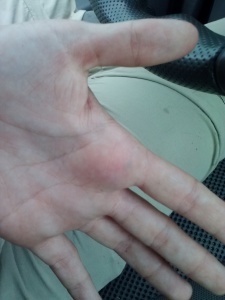 Loreli’s hand a the end of the day

Apparently, while trying to put a bee in her kill jar, she squeezed either a bee or a little wasp. She didn’t see the insect, so we’re not sure. Anyways, after that we left the farm and went on with our morning.

In the afternoon, we surveyed our first river site, no problem. But as we made our way to the second river site, we started seeing some big rain clouds moving in.

Rain in the horizon

We made it to our second river site, and started sweeping, and the drops started falling after 20 minutes. So we decided to stop sweeping and pick up our bee bowls. As Loreli turned the truck around, I picked up the bowls. But after bowl number three, two dogs, which appeared to come out of no where, started barking and chasing me. I just started screaming and running toward the truck, and jumped into the front seat faster than I could realize what was happening.

Those two dogs were ‘domesticated’, but apparently the owner leaves his dogs outside (in a fence free yard) while he’s out. So the dogs are free to bark and chase whoever they want! Anyways, with adrenaline pumping through my veins, we decided to go and pick up the bowls with the truck placed between me and the dogs. So, we drove up to about 2-3 meters from each bowl so that I could easily run out and jump back into the truck. Before getting out of the car, though, I grabbed Loreli’s spray sunscreen in one hand, ready to spray the dogs in their face if need be. More than once the dogs came chasing after me, but either Loreli moved the truck to scare them, or I managed to jump into the truck in time. 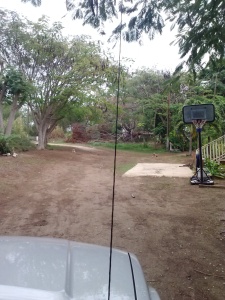 Crazy dogs waiting for me

We managed to get all but two of the bowls, which were right in front of the dogs’ house.

So we went to the farm, collected the bowls there, got muddy

and decided to go back for another try. Oh, and I forgot to tell you that on our way to the farm, Loreli told me that two undercover police officers had stopped to talk to her while we were sweeping the second river site. Apparently they were looking for some drug dealer who lived near where we were walking!

Anyways, on our way back to the river site, after surveying the farm, I picked up a stick to defend myself in case the dogs got too close. When we got there, we didn’t see the dogs, so I was able to get the bowl from right in front of their house. But they quickly realized we were back, and I had to sprint back into the truck. To get the last bowl, we basically backed the truck up all the way to the bowl, so I was able to get in and out without the dogs seeing me.

In the end, we made it out alive! Today sure was action packed! I sure am glad I love my job 🙂